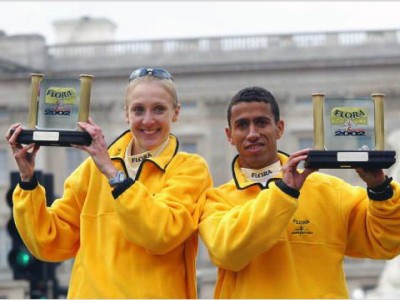 In 2002 I was commissioned to design and make all the awards for the Flora London Marathon. Thankfully I didn’t have to run it as well. Paula Radcliffe and Khalid Khannouchi won the event and are pictured here. 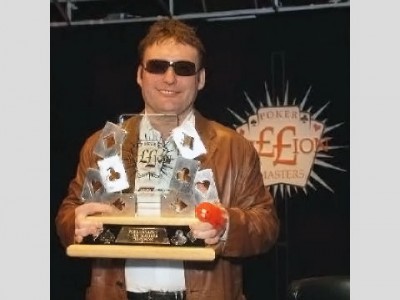 The Ladbrokes PokerMillion tournament is one of the world’s richest and Jimmy White surprised himself by winning it at his first attempt. 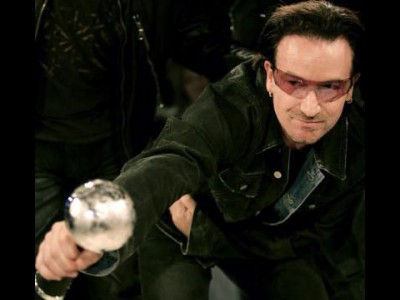 The Nordoff-Robbins Music Therapy Award.Every year I make these silver globes for Nordoff-Robbins Music Therapy which raises money to help children who only react to sound. All the Rock and Rollers like to donate huge sums for a charity that is dear to their hearts. Many of them take time out to assist the children directly. I am very fortunate that such superstars as Coldplay, Ozzy and Sharon Osbourne, Oasis, Paul Weller, U2, the Eagles and many others all have trophies I have made on their mantelpiece.(Commissioned from Theo Fennell Plc)

Dido and Coldplay receive their awards 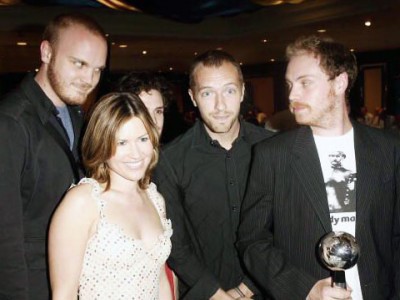 Dido and Coldplay after recieving their Nordoff-Robbins award. (Commissioned from Theo Fennell Plc)

Noel Gallagher and his Nordoff-Robins award 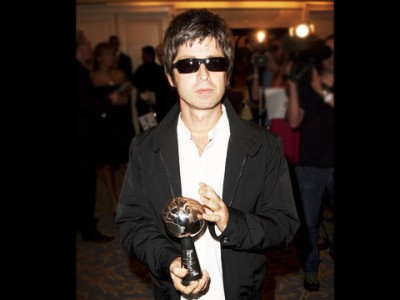 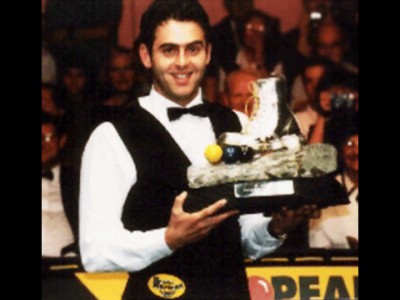 Doctor Martens sponsored the European Snooker League and asked me to make a trophy that looked like one of their boots. I took a mould of it and electroformed it in pure silver with gold laces. Every stitch and crease in the leather is visible. It sits on a plinth of lead crystal and wood and the boot is crushing some snooker balls under the toe. Ouch.

The Alhambra Puzzle and Princess Michael 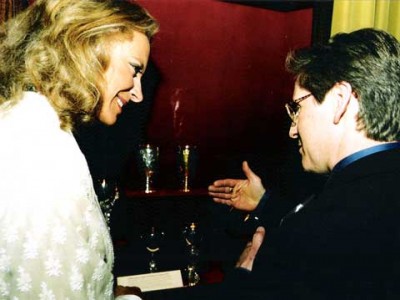 I was asked by the Goldsmith’s Company to exhibit the Alhambra Puzzle (see Objet d’Art) at Goldsmith’s Hall for the Golden Jubilee celebrations. I had a long chat with Princess Michael about puzzles and games, which was nice. 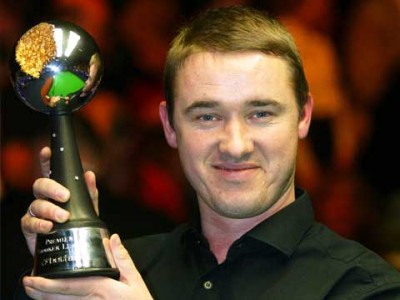 This unusual trophy was won by Stephen Hendry to add to several others that I have made on his mantelpiece. It is the Betfair Premier Snooker League award and was inspired by a visit to the Salvador Dali Museum, Figueres, Spain. This was the first of my gem-set trophies. 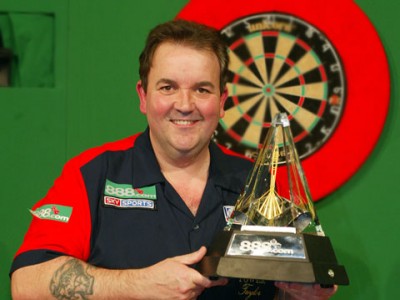 Phil ‘The Power’ Taylor’s trophy ,In 2005 I was asked to design a new trophy for the 888.com Premier League Darts tournament which Phil Taylor won in great style. 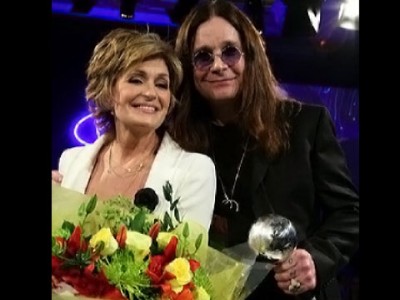 Ozzy and Sharon Osbourne, after recieving the Nordoff-Robbins award.(Commissioned from Theo Fennell Plc)

The Torvill and Dean blades trophies 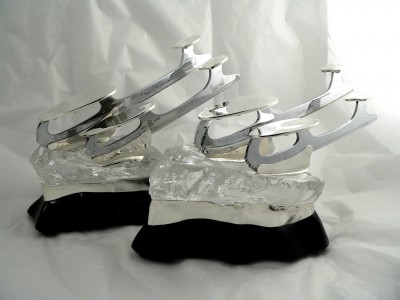 These awards were commissioned by Jayne Torvill as very personal mementos to be presented to two very special people in their professional careers.I used their actual blades, similar to the ones they used to win their gold Olympic medals, dancing to Bolero. These are mounted in silver, set on a piece of pure lead crystal. The silver surround was in turn, mounted onto a piece of ebonised, hand-carved mahogany. the shaped silver top plates are hand engraved with their signatures and very emotional messages of thanks. 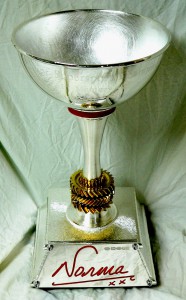 The British Superbikes Junior Superstock Trophy was commissioned by Michael de Bidaph, owner of Gearlink Kawasaki race team, in memory of his wife Norma, who was a true inspiration to hundreds of superbike racers over many years. The trophy features Norma's signature, engraved and enamelled in her favourite shade of orange, as well as three 23 carat gold-plated gear cogs from their company. It was presented for the first time, in 2018 at Brands Hatch. 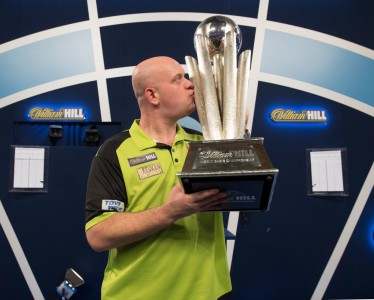 This massive trophy was commissioned by the PDC (Professional Darts Corporation) in memory of the legendary darts commentator, Sid Waddell and is nicknamed 'Big Sid'. Handmade in silver, brass, bronze and set with a 20 carat cabochon garnet on top of the hand-engraved silver globe, it weighs approx. 17 kilos. It is being held aloft by the winner of the 2018/9 Championship, Michael van Gerwen. The winner gets a half-size replica to keep. The Championships are viewed by a global TV audience of approx. 1.5 billion people. 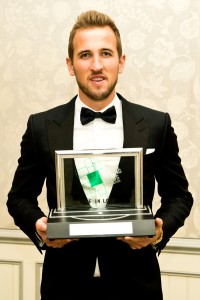 The London Playing Fields Foundation commissioned this trophy to be presented to a sportsperson who has had a remarkable effect in their sport during their career. The trophy has been designed to incorporate the LPFF's logo, etched and enamelled into jade glass. This award was presented to Harry Kane, so the support emulates a goalmouth, with silver inlaid into the ebonised plinth to look like the 6 yard box and penalty area. Other trophies have been designed to incorporate a silver Olympic running track when presented to Christine Ohuruogu. 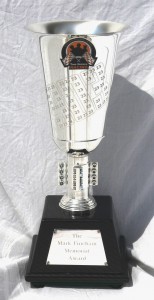 This trophy was commissioned by True Heroes Racing, in association with Colin Fincham, in memory of his son Mark, a serving officer and Superbike racer. Mark lost his lower left leg on active service but still raced with the help of a custom-made prosthetic. I incorporated that detail into the design: the hemispherical cup and bolted clamps, all made in silver, hold the main part of the trophy, engraved with his race numbers onto a hydro-dipped carbon fibre plinth, to symbolise the material that many race bikes are made from. True Heroes Racing does a magnificent job in the rehabilitation of servicemen and women physically and/or mentally injured on active service for our country, by including them and their skills in the Superbike race team. The trophy was presented to the person who had overcome the greatest adversity during the race season, in the 1000 cc category.