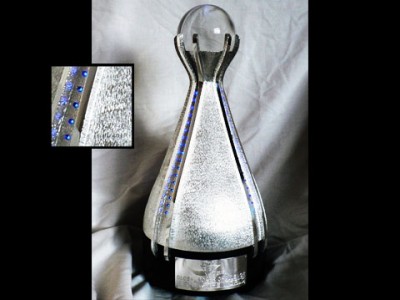 Full Tilt Poker commissioned this from me and the brief was ‘Big and Flashy’. Well, it was to be staged in Las Vegas, so they got ‘Big and Flashy’. The hand raised silver trophy has 88 blue LED lights applied to it. They respond to sound and flash when triggered by anyone talking/laughing/clapping near it. They loved it. 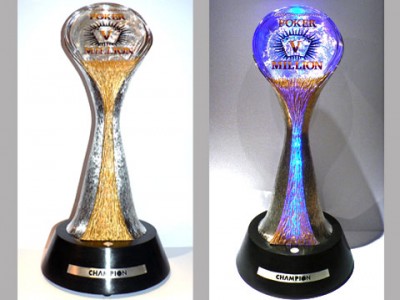 This polished and textured silver plated trophy has a hand carved ‘Lexan’ (like Perspex) section, also textured and polished applied to the front. This has been laser etched with the event logo which has then been enamelled by hand. The front has gold leaf added to it and the entire piece hides a mass of blue LED lights that are triggered by a micro-switch underneath the plinth. A suitably outrageous trophy for one of the world’s richest poker events. 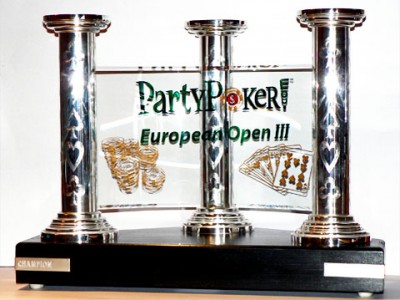 Another Poker event that was televised across the world. This uses a curved sheet of jade glass that has been etched and inlaid with enamel and gold leaf. This is securely held under pressure from the three columns, engraved with the suits, hearts, diamonds, clubs and spades. 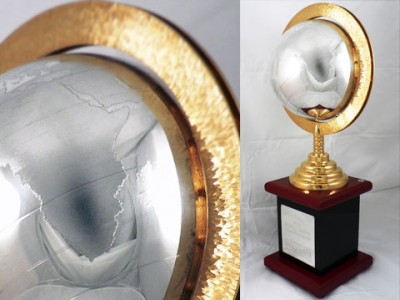 The Ladbrokes.com World Darts trophy has a silver globe with all the countries of the world hand engraved on it, supported on stainless steel pins in an ormolu circular cradle that allows it to spin. It was won by John Part in 2008 and was seen by millions of viewers on Sky Sports TV. The sponsor’s logo is always prominent on my trophies, so they get constant global coverage during the event. 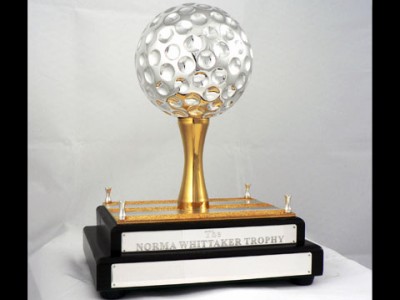 This was commissioned in memory of the wife of a long standing member of the Royal Eastbourne Golf Club in Sussex, England. The 4 ½“ diameter golf ball is hand made by soldering in 135 separately cut dimples to a spun sphere. The plinth plate has a chased pattern to resemble grass mown in a stripe pattern which has then been gold and silver plated. I like creating memorial trophies as they incorporate a lot of emotion, memories and help to celebrate the things that person was and always will be remembered for. 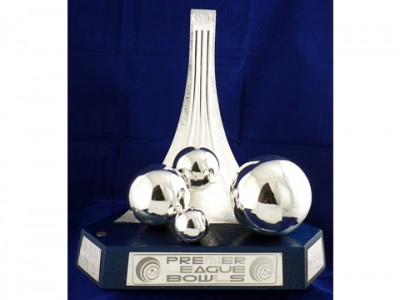 A new event, created by Barry Hearn of Matchroom Sport Ltd to champion Indoor Bowls. This was a great success, again viewed by millions of people on Sky TV. The trophy depicts three silver woods (bowling balls) around the jack. The raised stripes on the trophy show their curved path towards the target. The plinth has an unusual textured blue lacquer that I apply by hand. The blue matches the colour of the playing surface. 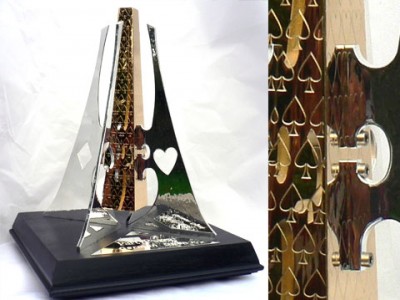 The brief was to create a trophy incorporating design elements linked to Germany. Hmm. Need to be sensitive here... So I used a stylized variation of the buttresses on Koln (Cologne) cathedral, a beautiful building showing true Germanic strength and vision. Phew! I must have got it right as I was commissioned to make the trophies for the last two years for this event. 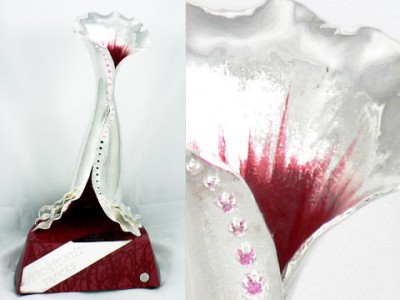 This outrageous trophy is for a new event, a quest to find the Drag Queen of the Year!!!!!! The silver has been shaped to look like a ball gown or stage gown, all open at the top to show off an ample décolletage (real or not), swooping down over the hips to flow out at the hem in a wave of ruffles. It is set with diamonds, pink and blue (faux) sapphires (for the ‘girls’, boys and ‘unsure’). “I am what I am,” etc…you know the rest. 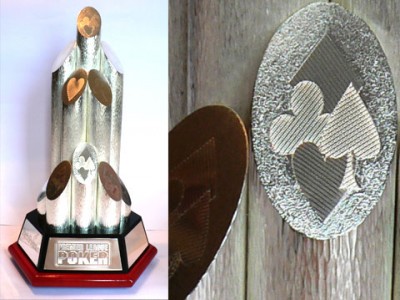 The inspiration for this one was the Empire State Building and this is nearly as big. 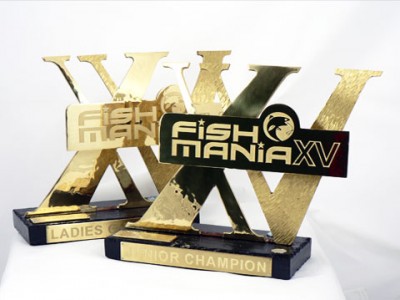 The fifteenth year that I have supplied the trophies for Europes biggest coarse fishing event, promoted by Barry Hearn’s Matchroom organization and staged in association with Sky Sports. This tournament is held in England and shown around the world. The lacquered polished and engraved brass is supported on hand cut Welsh slate. 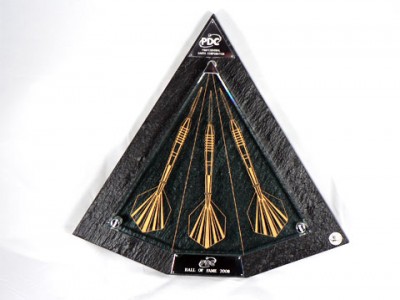 This is one of the Hall of Fame awards I make every year for the televised PDC (Professional Darts Corporation) awards ceremony. It uses hand cut jade glass, etched and inlaid with pure gold leaf and mounted on hand cut Welsh slate with engraved silver plaques.. 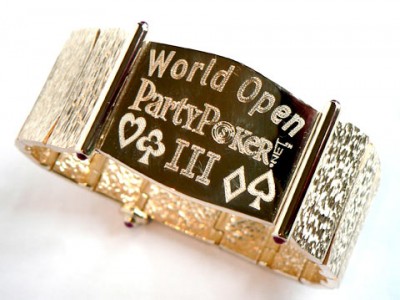 The PartyPoker.net World Open III trophy was a heavy gold, silver and ruby bracelet, loosely based on the WSOP (World Series of Poker) bracelets used in the US. Every link and hinge is hand made, it carries my London Hallmark (which the American ones don’t) and the winner wears it at every event.